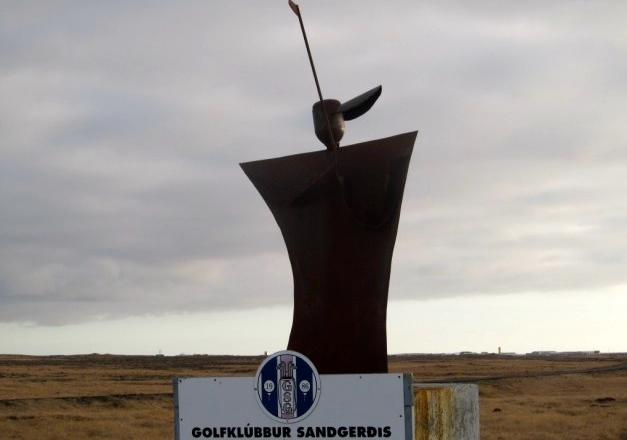 Play on a historical site and see Elves stones on the Golf Course of Kirkjuból in Sandgerði!

Very close to Leif Ericson´s airport in Iceland is the small fishing village of Sandgerði, which has a population of 1580, which makes it Iceland´s 23. largest village.

In Sandgerði is the beautiful 18 hole Golf Course of Kirkjuból; one of Iceland´s 62 Golf Course gems.

The Golf Club of Sandgerði (in Icelandic: Golfklúbbur Sandgerðis; abbreviated: GSG) recently celebrated its 30th anniversary, but it was founded in 1986. The yummy marsipan, cherry, chocolate birthday cake of the Golf Club in Sandgerði which is 30 yrs old this year 2016! Photo: Golf 1

The GSG Golf Course is well known and liked by golfers in Iceland. It is one of the few Golf Courses in Iceland, which is open almost all year round – even during wintertime and is usually among the first to open in spring.

Kirkjuból is a historical site and by the 7th tee box your in the exact place where the old farm of Kirkuból/Gamlaból stood and throughout the Golf Course there are lavafences (socalled Garðar) which all were obliged to build the Southwest of Iceland in the old times and are protected today and on the archaeological register in Iceland.

On the fairways on which the golfers play golf, various remarkable events in the history of Iceland have occurred and the Club raises the players awareness with cool signs, which have been erected by almost every 3rd tee box. For example in 1433 an official (kærmeistari) in Skálholt episcopal see in the South of Iceland, Magnus, asked to marry Margaret, the daughter of the master of Kirkjuból, Vigfús viceroy Holm, but Margaret broke Magnus´s heart. Angry, Magnus went with part of the lifeguard of Jon Gerreksson, the Bishop of Skálholt determined to burn down Kirkjuból and particularly Margaret. Margaret, however was the only one who managed to escape alive out of the fire on a 3 year old Icelandic horse. Margaret, swore a solemn oath that she would marry whom ever would avenge this evil doing.   That man turned out to be Þorvarður Loftsson, son of the chieftain in Möðruvellir, in the North of Iceland.

Kirkjuból has throughout the centuries been dear to Northerns (Yankees, if you will) in Iceland. In 1550 Christian king the III of Denmark wanted Iceland to convert from catholisism to lutheranism; so that he could get hold of the riches of the catholic church and become the head of the Church of Iceland. Part of the reform was that the kings men executed the last catholic bishop over Iceland, Jón Arason along with his 2 sons, in Skálholt on November 7th 1550. So you can date the reform in Iceland exactly. Jón Arason, the last catholic bishop standing was bishop in the North of Iceland, in Hólar í Hjaltadal.

In 1551 seasonal workers from the North of Iceland took revenge in Kirkjuból for the killing of Jón Arason and executed the agent of the Danish king, Christian writer and his men and treated their bodies shamefully. Then they went out to Álftanes, arrested the executioner of the last bishop (Jón Arason) and forced the executioner to drink melted lead and after torturing him,  killed him . The Danes managed to bring the fewest of these northern retaliators to justice.

The Pro´s of playing the Golf Course Kirkjuból in Sandgerði:

*The Golf Course is the only one in Iceland where you might be able to see rabbits. The Rabbits by the 10th green on the Golf Course of Kirkjuból in Sandgerði, Iceland. Photo: Golf 1

*Obviously from the abovementioned if you just arrived in Iceland via airplane or are leaving the country – the Golf Course Kirkjuból is  only a short distance away.

*Also you´ll be playing in a part of the country where Icelandic history took place.

*The Golf Course of Kirkjuból is par-72 and open most year round.

*It´s not too demanding, it´s a rather flat course with only a few exeptions.

*The view from the Golf Course, provided you get good weather and the visibility is at its best ….. is breathtaking.  On a clear day you can see the lighthouse of Garður and the Snæfellsglacier (hole 8)

*The atmosphere and likebility of the ones receiving you (staff aswell as others) on the golfcourse of Kirkjuból is among the highest in Iceland.

And at last, don´t miss the eleves stones by the parkinglot of the Golf Course of Kirkjuból in Sandgerði The habitat of Elves in Iceland, Elves Stones; here the two on the Golf Course of Kirkjuból. Photo: Golf 1

PS: What are Elves you might ask? Short answer: The easiest answer to this question is that elves are elves. Similarly if someone were to ask what a human is, the answer would be a human is a human. Besides the many differences between humans and elves, it is of note that humans have a Latin name (homo sapiens) while elves do not.

Belief in elves was widespread in the Nordic countries and across Europe before Iceland was inhabited.  There is a slight difference in the belief as it appears here in comparison to that of neighbouring courntries. In old Icelandic writings, elves are mentioned in several places. In Iceland´s most famous saga, Njál´s Saga, a person is compared to an elf […]

The twelth century scholar Snorri Sturluson considered Iceland´s most important author and poet wrote about elves…. the origins of the elves is elucidated in several ways. One is that they are the unclean children of Eve whom she hid when God came to visit, so she did not want to show them to him. God instructed that what was hidden to Him should also be hidden to humans, and so elves have been invisible to humans ever since ….

The PS part is an excerpt taken from the book: „A Guide to the Hidden People of Iceland – „Being Elves-where” by Páll Ásgeir Pálsson.