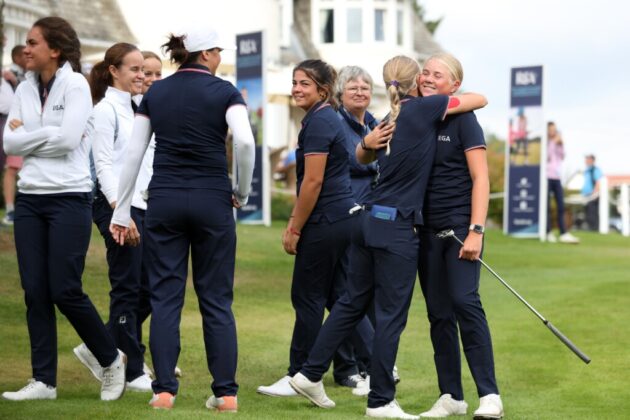 The Continent of Europe take a 5½ -3½ lead into day two of the Junior Vagliano Trophy after a strong performance in the afternoon singles which saw them win three and halve two of the matches. The match was level at 1½-1½ after the morning foursomes.

England’s Rose Bee Kim gained a point back for GB&I with a 3&2 win against Anna Cañadó Espinal while Maggie Whitehead and Isla McDonald O’Brien halved their matches with Carla De Troia and Perla Sól Sigurbrandsdóttir.

Earlier in the day, van der Sluijs and De Troia emerged triumphant by 2&1 from their match with Crawford and Whitehead. McDonald O’Brien and Wan won the bottom tie against Sigurbrandsdóttir and Axelsen by one hole. The Spanish duo of Cañadó Espinal and Revuelta Goicoechea halved their match with Rosie Bee Kim and Marina Joyce Moreno.Myrte Eikenaar, non-playing captain, the Continent of Europe, said, “We’re pretty happy with how the performance went today.

There was a lot of good team spirit. “The team is feeling confident, you always come here to win. You can see them fighting for the trophy out there and we believe that we can do it. We obviously have a good record in the match but the pressure builds each year to keep on retaining the trophy. Great Britain and Ireland has a good team so it’s going to be close but fun to see who wins.” Janet Melville, non-playing captain, Great Britain and Ireland, said, “I thought the team did really well today and they’ve gone out and done themselves proud.

“All the matches were close and we’re still in with a shout tomorrow. It wasn’t looking too good at one point this afternoon but they responded really well. Maggie Whitehead got a great halve, Rosie [Bee Kim] won her match and Isla [McDonald O’Brien] was three down but finished all-square. “We’ll come out all guns firing tomorrow and hopefully we will be ok. They just need to believe in themselves and that they can do it.