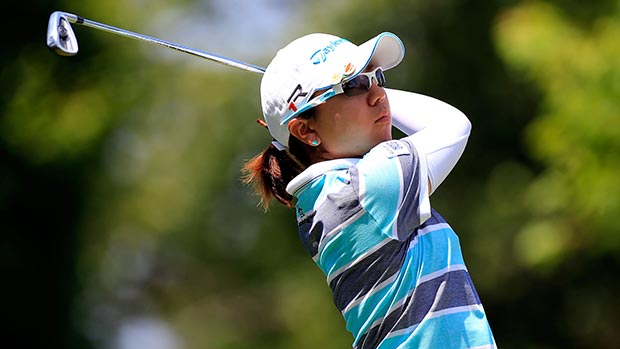 changed putters following a missed cut at a tournament in Texas in April, hoping to put a quick end to what had been a disappointing season so far.

Miyazato’s move has paid off in the form of her top three finishes of the year — including her best round of the year on Friday.

The Japanese golfer birdied six of 10 holes in the middle of her round to shoot a 6-under 65 and earn the first-round lead at the LPGA Tour’s NW Arkansas Championship. The round was only Miyazato’s second in the 60s this year, topping the 69 she opened her year with in Thailand in February.

Miyazato finished in a tie for second at the event last year, missing a 15-foot birdie putt on the final hole to finish a stroke back of winner Ai Miyazato. The Japanese golfer hit 16 of 18 greens in regulation on Friday to finish a shot ahead of So Yeon Ryu and Angela Stanford at 5 under.

„Well, I was disappointed last year, but I was very good friends with Ai, like [an] older sister [to] Ai,“ Mika Miyazato said. „It was a good experience last year.“

Ten golfers are two shots back of Miyazato at 4 under, including local favorite Stacy Lewis, who played collegiately at the nearby University of Arkansas.

World No. 1 Inbee Park is four shots off the lead after shooting a 2-under 69.

It was Miyazato, however, who bested the rest of the star-packed field on Friday — a group that included 97 of the top 100 on the money list heading into next week’s U.S. Open.

She did so despite a disappointing year so far, one that had her enter this week 46th on the money list and 77th in scoring average. Still 15th in the world rankings, Miyazato had struggled mightily with her putting — ranking 133rd on the tour.

She looked comfortable from tee to green on Friday, hitting 16 greens in regulation and making several key putts. That included a 10-footer to save par on No. 16, on that followed her final birdie of the day on the par-3 15th.

Miyazato was heartbroken after last year’s close call at the tournament, which would have been her first victory on the tour. She went on to win her first LPGA event later last year at the Safeway Classic, and she’d like nothing better than to add to that total this weekend.

„I think (the) second win is more difficult than the first win,“ Miyazato said.

While Miyazato posted the lowest score of the day during her morning round, Lewis enjoyed the largest gallery during the afternoon in front of her Arkansas fans — who serenaded her with a call of „Woo Pig Sooie“ after she hit the green on No. 17.

The Texas native missed her birdie putt on the hole, but she closed out her round with an up-and-down birdie out of the greenside bunker on the par-5 18th.

The world No. 2 earned an unofficial win at the rain-shortened event as an amateur in 2007, but she hasn’t finished higher than eighth since. She had no such problems on Friday, hitting 13 of 13 fairways and closing with four birdies on the back nine.

„I got off to a little bit of a slow start, just wasn’t really making any putts on the front and then kind of relaxed there on the back, made a few putts,“ Lewis said. „… I was feeling good. Even when I was even par, I was feeling good about my game.“

The course at Pinnacle Country Club played slow and soft earlier this week following heaving rains in recent months. However, hot and humid conditions throughout the week began to speed things up on Friday — which was just to the liking of many of the golfers.

Miyazato’s took the early lead with her morning birdie binge, and her 65 held off a group of 12 golfers who are within two shots of the lead. Ryu posted her 66 while playing with Miyazato in the morning, while Stanford’s 5 under came in the afternoon in Lewis’ group.