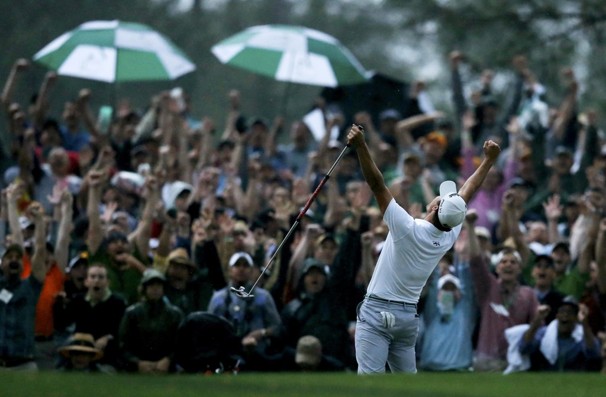 Augusta Master – Scott is first winner from Down Under.

ADAM SCOTT banished the ghosts of his Open collapse as he ended Australia’s agonising wait for a first Masters champion last night.

ADAM SCOTT displayed a perfect sense of timing as he ended Australia’ s Masters curse – his win came on the 17th anniversary of Greg Norman’s notorious final round meltdown at Augusta. Scott told us he’d birdie the last… and he did! First Australian winner of Masters gives us a genuine Augusta fairytale.

Scott won for himself and Australia

Adam Scott’s Masters win one for the record books.

After several close, agonising defeats for players from Down Under, 32-year-old claims green jacket in thrilling play-off against Cabrera

THE TIMES OF INDIA

Adam Scott shakes off shackles of past failure with nerveless victory in Masers.  He ends Australia’s 77-year wait for a winner at Augusta.

Masters champ wins for Norman and a nation.

Chris Wood: I was delighted Adam Scott won the Masters.