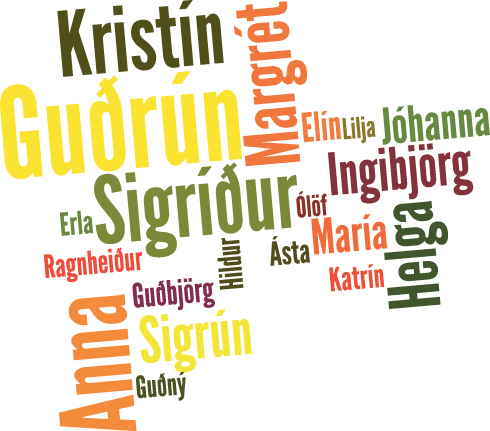 The following is taken from the Iceandic Statistics:

The analysis of naming practice in Iceland shows that:
*only 200 given names (eiginnöfn) account for the names of almost 80% of the male or female population
*more than 35% of people less than 30 years old inherit some of their grandparents’ given names. This percentage is higher for older generations
*over 8% of people less than 50 years old inherit some of their parents’ names, more often men than women. The percentage is about the same
for older generations
*newborns’ names in Iceland are correlated to popular names from sports
(football, handball), music and film around 82% of people have patronymics and/or matronymics (föðurnöfn, móðurnöfn) as their last name, about 4% have Icelandic family names (ættarnöfn), about 14% have different types of last names, mostly non-Icelandic
*when only the father has a family name, most children inherit it (about 70%), but a significant percentage receive a traditionally formed name (about 30%, mostly patronymics)
*when only the mother has a family name, most offsprings receive a traditionally formed last name (about 85%, mostly patronymic, slightly higher for men than women) and only a small proportion (about 15%, slightly higher for women than men) the mother‘s family name.
The distribution of birthdays has evolved with time. For instance there is a significantly higher numbers of births during summer months in the past decade than 50 years ago when births were more evenly distributed throughout the year.

Introduction
In this paper, register data is used to analyse given names’ popularity by age, gender and birthplace (landsvæði) in Iceland and to shed light on naming practice, such as how likely it is to inherit grandparents’ or parents’ given names1 (eiginnöfn), what are the recent cultural influences reflected in the choices of first names for babies, how likely is to have a patronymic (föðurnöfn), a matronymic (móðurnöfn) or a family name (ættarnöfn), depending on age, gender and various attributes of parents.

Most popular given names
Given names
According to the 1703 census, there were 387 and 338 given names for men and women respectively The number of Icelandic names in Mannanafnanefnd — database1 at the beginning of 2017 was 1,912 for men and 2,118 for women. At the same time, the total number of given names according to Registers Iceland was 6,188 for men and 7,322 for women, these numbers include names of foreign origin and most of them have very few occurrences in the population.
Alexander was the most popular given name of new born male children in 2016, followed by Aron and Mikael. For new born girls, Emilía, Emma and Elísabet were the most frequent names.
In the population as a whole the rankings of the most popular given names have not changed significantly in the last five years. Among males, Jón is the most frequent first name, followed by Sigurður and Guðmundur, while Jón Þór, Gunnar Þór and Jón Ingi are the most frequent double names. Among females, Guðrún, Anna and Kristín are the most popular names while Anna María, Anna Margrét and Anna Kristín are the most popular double name combinations.
The frequencies of given names have changed through time. For example, about one in five women was called Guðrún when the 1703 census was conducted, but only one in ten according to the 1910 census. During the same time, the total number of female names tripled. In the 100 years which followed, the number of Icelandic female names in Mannanafnanefnd’s database has doubled while the name Guðrún is three times less frequent. The population itself has increased approximately seven times since 1703.
In addition to frequencies of names, their rankings tell an interesting story. Classical names which are most common in the population as a whole have been constantly in the top 20 for the last 100 years, as shown in figure 1a for female names and figure 2a for male names. However, fewer children born in the last 10 years have names like Guðrún, Kristín, Sigurður, Gunnar or Ólafur.